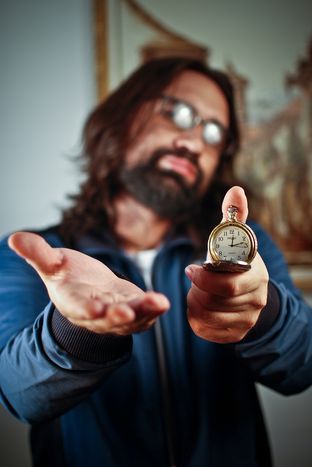 From London to Athens via Toulouse, Europe is gripped by a sort of monetary euphoria. Everyone wants to create their own currency! Is it a direct challenge to eurocrats? Probably. Is it a response to the crisis? Maybe. Part one in a series of articles on a phenomenon that transcends national borders

We're going to repeat the weary phrase...Will Greece End Up Leaving The Eurozone? The coastal city of Volos, half-way between the capital Athens and the second-largest city Thessaloniki, is ready for any eventuality. At least, it's nearly ready. Some months ago, a local exchange trading system (LETS) was created in the port city, which has around 140, 000 inhabitants. The project involves about a thousand people, for whom time has now replaced money as a medium of exchange. For example, I can give an hour of guitar lessons to a member of my local LETS network for an hour of service from one of the other members. If, instead of hours of service accumulated, I receive coupons or 'local alternative units' (called 'Tems' in Volos), I can also use these to buy goods and services from businesses that are members of the network. The idea is simple and user-friendly - once you reach 1, 200 Tems you have to start using them, and you can't owe more than 300 - and there is no more effective a system when you find yourself pockets empty and unable to buy anything.

In Greece, there have been around fifteen active or nascent LETS networks in existence since the crisis hit and austerity plans were introduced. Yet the country, the cradle of modern European civilisation, is not the origin of the LETS system. It is thought that the first such system was introduced in Canada in 1930. However, it was the 1990s that marked the golden age of the LETS scheme in Europe. In Italy, the system has been introduced in its simplest form 'la Banca del Tempo' (the Bank of Time, BdT). A bill which was approved in 2000 set the system within a legal framework and encouraged communities to open these establishments. The success of the scheme is unparelled; the northern Italian region of Émilie-Romagna has always been one of Italy's most prosperous areas, yet during the financial crisis, banks of time could take centre-stage. This is precisely what is happening in Spain, where LETS schemes have become something of a national obssession. A blog called vivir sin empleo ('live without employment) has mapped out LETS networks throughout the country: around 300 are thought to exist in Spain already, with more networks being created every day.

Whilst bartering, trade and mutual aid seem particularly adapted to the social structures along the circumference of the Mediterranean, however, the bulk of the LETS scheme's supporters tend to live north of the Alps. In France, there are around 500 LETS networks (Sel), some very active with hundreds of members, whilst others lie dormant. Since the start of the 2011 academic year, two so-called 'accorderies' have opened in Paris and Chambéry in south-eastern France. Born of a French-Canadian spin on the LETS scheme, these 'accorderies' have been created with an aim to help those living in working-class areas. Finally, in Austria, the 'Tauschkreis' is benefiting from official recognition from governing institutions in the western region of Vorarlberg. According to Rolf Schilling, the Tauschkreis project leader, 2, 000 people trade 30, 000 hours via the Tauschkreis each year. Most importantly, 'Talents' - the Austrian LETS scheme coupons - are accepted by 130 businesses in the region, as well as by a number of local collectives, thus making it possible to pay up to 75% of local taxes in local currency.

In the north, making our own money

In northern European countries, these alternative currencies have freed themselves from systems built on bartering and/or mutual aid. They've become far more sophisticated; within a community, it is possible to exchange your euros against a so-called 'complementary currency' (in the form of notes or credits on an electronic card) which you can use to make purchases. The primary aim is to keep wealth within the district concerned; when you buy something at a supermarket chain, your money usually leaves your community and ends up profiting the company's shareholders at the end of the year instead of local traders.

As such, the target of these new local currencies is not so much the euro as it is the functioning of the economy in its entirety. Some, for example, advocate a veritable deontology: only those companies respecting the obligations of a charter (for instance, the sale of organic and/ or fair trade produce) are able to join the LETS network. This is often the case for complementary currencies in the United Kingdom (and now, by extension, throughout all of Europe), which operates under the auspices of the so-called 'transition towns' initiative. In Brixton, a working-class suburb in Greater London, Simon Woolf is the managing director of a structure which manages the Brixton pound (B£). 'We don't have any exact figures but we estimate that at least 3, 000 of the town's 56, 000 inhabitants have used the B£ at least once in one of the 200 registered businesses,' says Simon.

With 70, 000 B£ in circulation and a 'pay-by-text' system tested by 400 subscribers, you are most likely to see these notes being exchanged in cafes and restaurants, thus drawing accusations that the Brixton pound is a currency for 'champagne socialists'. On the continent, it's Germany that holds the record for alternative currency in circulation, with the equivalent of 900, 000 euros available in various local monies. The leading German example is the Chiemgauer, a currency exchanged by some 3, 000 consumers in 600 businesses in Southern Bavaria. These are impressive figures, to be sure, but it's hard to imagine the leaders of the European central bank worrying about the breakthrough of alternative currencies. What's more, no European government seems able to take these initiatives seriously.