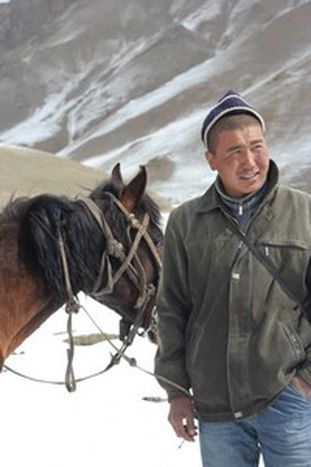 Alone on the roof of central Asia

23-year-old Charchanbek is a herdsman in the high mountain pastures of Kyrgyzstan. This 'tchabane' lives as if secluded from the world, against a perfect and unspoilt cinematic background

Charchanbek takes off on his horse with a quick and purposeful gallop. He heads for the high Kyrgyz mountains which dominate the old ‘caravanserail’ of Tash Rabat, on the roof of Central Asia. The wind blows, cold and dry. A harsh sun burns down. In a virgin world surrounded by complete silence, life often seems like a struggle for survival, between snowstorms and vast inhospitable expanses.

Kyrgystan is often nicknamed the 'little Switzerland of Central Asia' for its magnificent alpine mountains and its high-altitude transparent lakes. It's probably also because this country has been the most democratic of Central Asia since its independence, which came about the day after the implosion of the Soviet Union in 1991. Daily life for the Kyrgyz remains far removed from that of the Swiss though. Despite the famous 'Tulip revolution' of March 2005, which ended the rule of President Askar Akaiev, change has been slight.

Yaks, sheep and cows belonging to Charchanbek graze peacefully and enjoy the first spring blades of grass which appear between the last clumps of snow, which covers the valley for seven months of the year. The 'tchabane' (which literally means Kyrgyz herdsman), usually checks his animals every morning on horseback. He makes sure that they have not strayed too far or been injured. In the spring, during the mating season, the newborn and the pregnant females need special attention.

Two years ago, Charchanbek decided to leave his job at the great 'Dordoy Bazar' in the capital, Bishkek. He moved to the virgin valley of Tash Rabat. ‘I prefer to work here, and I wouldn't return to Bishkek for anything in the world,’ he says. After taking his father’s animal herd, Charchanbek now owns 200 yaks, more than 250 sheep and a dozen cows to provide ‘all the milk, butter, cream and meat that the family needs.’

Looking after more than 450 animals is no small affair for one man. Between the milking of the cows, the calving, the animals' injuries, the shearing of the sheep, and rounding up at the end of each day, Charchanbek doesn’t enjoy days off. Whether from minus 45 degrees celsius in the winter to 40 degrees in the summer, he stays in the same little 'house' of clay and straw: two rooms with no running water or electricity. Balanced beside one of the two windows of the main room, a little battery powered radio keeps him company. One of his three loyal dogs and companions sleeps below the stove, which burns a mixture of dung and earth by day and night.

Sometimes, for the Sunday animal fair, he goes down to Naryn, the main city of the south of the country, four hours away by car. He often meets his friends Talar and Esengul, his neighbours of the same age who live in the biggest farms of the area. Together they smoke and talk about the new faces among the girls in the villages down the valley.

Despite these extreme conditions, Charchanbek says that he loves his work. In counting the price of his animals, his face, marked by the glacial wind and the burning sun, comes to life. His thin chapped lips give a hint of a smile. When they reach 250 kilos, a yak sells for 300 dollars and a sheep 100 dollars. Raising 200 yaks can bring in a lot of money.

‘When I sell an animal, I keep a bit of money back. I go to the cafe or maybe to the discotheque, but I come back home early because I prefer to be here.’

It's hard to imagine a nightclub in this wild landscape. However, attitudes in Bishkek are much more liberal than in neighbouring capitals: here there is a modern infrastructure, girls in mini-skirts who smoke in the street, MTV culture and couples who kiss in public. The influence of Russian immigrants on the use of contraception and pre-marital relationships is

perceptible, as well as the practising of the Chamanist religion.

Although the capital is far from Charchanbek's small home - a good day's journey by car, it's true, as is often said, that the Kyrgyz, a nomadic people who count among themselves almost 80 different ethnic groups, have always been more open and welcoming than their neighbours.

During his last trip to the city Charchanbek bought himself a pair of Russian binoculars which he wears proudly slung over his shoulder. The face of the free rider suddenly darkens - not because he's nostalgic for the busy life of the capital, but because he's troubled by the lack of young women. ‘Sometimes it's hard,’ he admits.

In less than one month, the valley will be invaded by the yurts and the families from the towns of Naryn, Kara-Suu and At-Bashy who bring up their livestock to pasture for the whole summer.

‘With the families who come, there will be at least five young girls. Mine will be among them,’ he declares, his face overjoyed and filled with excitement, although he knows

that it will be hard to marry her and then to convince her to come and live here all year long. ‘It's not a job, it's just my life. I love the mountains, I love my animals and I love the sun. Why should I do anything else? Are things not good as they are?’