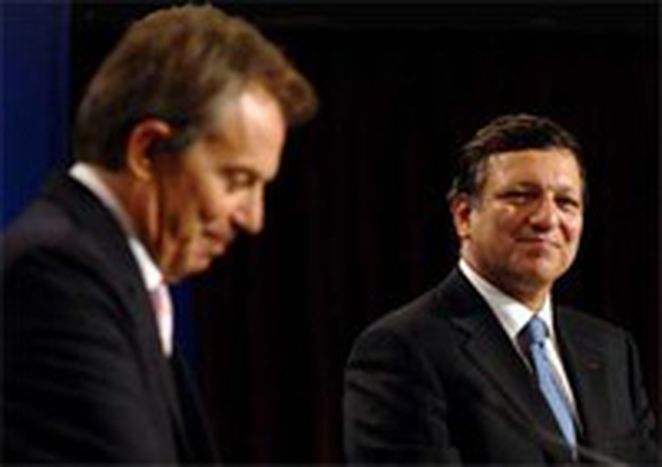 EU leaders emerged ‘united’ on how to tackle globalisation after an informal summit at Hampton Court Palace on October 27. However, the EU budget for 2007-13 remains a major sticking point for improved relations.

What results would you expect from a meeting of 25 European leaders, sitting together at the feasting table of a former royal residence to chat, informally, about the future of Europe? Not too much, you might say. And indeed, when the majestic doors of Hampton Court Palace opened again, and Tony Blair and EU Commission President Jose Barroso faced the media, they said exactly what you would expect them to say: everything went really well.

But behind the smiles, you could not help sensing some real progress. A “clear direction” to face the challenges of globalisation had been set; a “broad consensus” been reached on the Commission’s paper (on immigration, universities, energy and work-life issues among other things); and a strong will emerged to get the EU "back on track and moving in the right direction".

What is most significant is not so much what has been said, but that it has been articulated with one, strong voice - give or take some cracks caused by German Chancellor Schroeder and French President Chirac. “Moving in the right direction” seems to mean “moving in one direction”.

This is a good starting point for real change. Now, the right moves have to be made, and many leaders won’t have an easy time bringing home today’s words. An overly optimistic Blair, for instance, might soon have to tone down his rhetoric when faced with his cabinet and the Eurosceptic part of his population.

Moreover, the EU’s future budget – the biggest issue facing the Union - wasn’t even on the table at Hampton Court, and for good reasons. The budget lies in tatters since the June summit failed to reach a conclusion, thanks mainly to Britain’s strong insistence on its €5 billion rebate from EU coffers and France’s equally ferocious resistance to any reform of the Common Agriculture Policy.

All leaders know that reaching an agreement on the budget is crucial. But they also know that doing so will be very hard work. Good-spirited informal chats won’t help this time and none of the issues that wrecked a deal in June have gone away, nor are they likely to do so. Asked about the issue, everyone at Hampton Court seemed to have the same answer: we will discuss it at the formal summit in December, marking the end of the UK’s EU presidency. Tony Blair knows that his presidency won’t be judged on today, but on whether or not he can broker a budget deal. And everyone else knows that without a budget, the EU won’t move anywhere at all.

During Thursday’s talks, much has been made of Hampton Court’s green, well looked-after maze as a metaphor for a troubled EU without a vision. It’s fair to say that the informal summit hasn’t shown the EU a way out of the maze. But it’s also fair to say that it has helped the European leaders to find each other in there, and now they’re no longer stumbling alone, they should seize the moment and take each other by the hand. And then tackle the real issues head on. Because that is the only real way out.