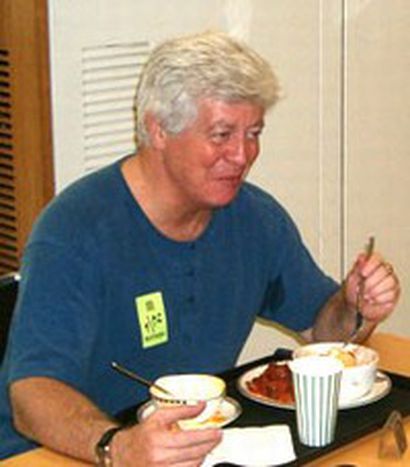 ‘Euro-propaganda, eh?’ was the first thing UKIP founder Dr Sked said when I told him about café babel. It was to mark a fiery debate on the UK and European cooperation.

The venue for our lively discussion was, quite suitably, ‘The Debate’, a large restaurant located in the Houses of Parliament in London – one of the few places which Dr Sked’s former party, the United Kingdom Independence Party (UKIP), hasn’t been able to penetrate.

While I ordered a typical English jacket potato, Dr Sked, surprisingly, went for French bread and soup. This jolly Eurosceptic may not be a fan of a political Europe but he does favour cultural ties. “I know several languages, including German and French. I love European culture and enjoy travelling around the continent.”

However, being situated in such a traditional parliamentary institution meant that the chat couldn’t stick to culture for very long. When I asked Dr Sked about his politics, he said “I’m a liberal. Let everyone do what they want, just don’t let it hurt me. Sure, the rest of Europe can integrate further, but keep us out of it!” But isolationism hasn’t always been the keyword for Dr Sked’s European policies. “When I was about your age [19], I was also a big fan of Europe. I was active in the Liberal party [now the Liberal Democrats], which is still one of the most pro-European parties. And later I directed the Centre for European Studies at the London School of Economics (LSE). But then I saw what a mess the EU truly was.”

This comment marked the start of an aggressive attack on “the loony bureaucrats and their red-tape”, words I was to hear very frequently in the next hour. Dr Sked blames “The European superstate” for a large variety of things. “It’s killed our fishing industry. It’s made us give up our sovereignty on a large number of topics. And it’s cost us a lot of money.” Really? How about the economic growth Britain has enjoyed thanks to closer Europe-wide economic integration? “That may be, but the net result still is negative. The resources we have lost because of Europe could have been invested in more profitable ways."

Of course, I could not leave this offence un-rebutted. Surely Dr Sked, a Senior Lecturer in International History at the LSE, realises the unprecedented period of peace, stability and security that the European Union has brought about? My fellow diner started laughing. “The Habsburg Empire said the same thing in the nineteenth century.” The Habsburg Empire, the medieval Catholic Church, Stalinist Russia and Nazi Germany are just a few of the institutions that Dr Sked compared the EU with. However farfetched some of these parallels may be, trying to contradict an esteemed academic isn’t all that easy.

Britain and the EU

It’s not all that surprising, given his views, that Dr Sked would like to see his country leave the EU as soon as possible. “75 percent of the British public are neutral or indifferent to the EU. Yet the elitists in government and in Brussels still push for closer union. When did they ever speak to the people?” But isn’t it the case that many Brits are simply not aware of the great advantages that EU membership offers Britain? “That’s elitist talk again. Straight from Brussels”, he retorts. How about the close ties Britain has to the rest of Europe, politically, culturally and economically? “I feel more like an Australian or an American than a Hungarian. Also, how can you relate the centralising and very corrupt democracies of, for example, France and Germany with British political institutions?”

Converting a man so very much set in his views was definitely not what I was going to get out of this conversation. So I went for a different approach. If you’re unhappy with the bureaucratic machine of Brussels, shouldn’t you aim to encourage effective internal reform? “Everyone says that, but no one comes up with proposals. Blair? No, he hasn’t got a clue.”

That was the end of that chapter. We move on to Dr Sked’s own political career. In 1993 he founded UKIP, with the withdrawal of Britain from the European Union as its central policy. “I was busy turning the Tory party [the Conservatives] into a Eurosceptic movement. But I didn’t think things were moving quickly enough, so I formed UKIP. If parties see their share of the vote shrink, they will adapt their policies much quicker.” Mr Sked believes he has been successful on this front. “All three main parties in Britain [Labour, Liberal Democrats and Conservatives] used to be pro-European. Now only two are.”

Yet the relationship between UKIP and its founder has deteriorated over the past few years. “They hate me now. Maybe even more than they hate Brussels”, he laughs. “The party has just become too right-wing and has completely changed its policies. We never used to want MEPs, there would just have been empty seats in the European Parliament.” This does not mean, however, that Dr Sked’s political career is over. If the Conservative party ‘dares’ to choose a pro-European leader, the academic vows, “I will probably establish a new party. I’ll probably call it the International party, because that’s what I’m for.”

I’ve heard and absorbed a lot of negativity about the whole European project. Just for a change, might it be possible for the historian to imagine a positive future for EU cooperation? “A popular Europe is feasible, but only if we have a common enemy, like Islam for instance. But I sincerely hope that doesn’t happen.”