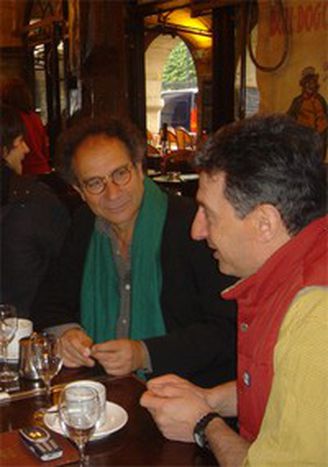 Alain Keler and Didier Lefèvre, the eyes of the world

In Café Hugo, in the heart of Paris, café babel talks with two photographers who, since 2003, have been documenting the agricultural and lifestyle changes of farmers in Central and Eastern Europe.

The interview gets off to a flying start, but not exactly the start I had envisaged because it’s photo-journalist Alain Keler who fires off the first (and 64 million dollar) question to me: “So will you vote Yes or a No for the [European] Constitution?” The polite Parisian waiters discretely turn away as he launches into an impassioned plea for the Constitutional Treaty in which he strongly backs the recent accession of 10 new EU member states. He’s a good guy and he knows his subject. In 2003 he and his buddy Didier Lefèvre (sat opposite me) started to photograph young farmers in the eight Central and Eastern Europe countries who at that stage were candidate countries for entry into the EU. The Les Yeux de la Terre (Eyes of the World) organisation slowly grew from an initial group of eight photographers who, according to Didier Lefèvre, “at first just wanted to work as a group of friends on a single topic. We came up with the idea of agriculture after a hearty meal washed down with a bottle or two. First we worked a bit in France and then one of us found out about what was on the horizon in Europe. So then we created the Gens de Terre - la Nouvelle Europe (People of the Earth – The New Europe) project about farming in EU enlargement candidate countries, because it’s an exciting subject and also so we could get some funding.” The idea was to portray farmers’ situations pre and post enlargement. The YDLT website is very clear about this, presenting the project as “a photographic documentary piece” spanning from 2003 to 2013.

Meeting Pepa in the Czech Republic

Didier Lefèvre chose to visit the Czech Republic amongst other places. So what did he take away from his three visits to Sasov (nearly a hundred miles south of Prague)? He describes how “my Czech contact Pepa was only relatively enthusiastic about the EU before enlargement. This is still the case. He showed me the mountain of paperwork that he’d filled in - and still all that he could buy with his EU subsidies was a flannel jacket for the winter. However he has invested a lot into bringing all his animals up to European organic standards. At the same time he is seeing Carrefour[A large French supermarket chain] and Renault build huge factories there because labour is cheap. And Carrefour won’t buy his organic meat for a reasonable price… Pepa isn’t used to free competition like this where the market is king”.

After berating the waiter’s inability to bring him his ideal cappuccino (“A shot of coffee and a cup of frothy milk on the side. Come on, it’s not rocket science!”) Alain Keler talks to me about his experiences in Poland; “I wasn’t able to do everything I wanted to. A family of four put me up in Tatras. Farming their land was more of a secondary thing for them and they lived off other means. However I did arrive during harvest time and so I got some nice pictures. I’m not sure though if I will go back. In winter it’s harder and farming almost grinds to a halt. Plus we had to fund most of this travelling ourselves which is slowing down the progress of the project a bit”. Seeing that I look surprised at this he explains to me that Catherine Baduel, co-ordinator for the group and president of the organisation, has lobbied hard but still hasn’t managed to get hold of enough funding for their work. Of course it costs a lot to pay eight professional photographers for a ten-year project. Didier Lefèvre estimates “about 300,000 euros a year for ten years” is needed for all logistical costs and salaries. Nonetheless this is a very European project and as Keler adds “European agriculture accounts for a large part [around 45%] of the EU budget so we really should be interested in it. We were even more surprised when Catherine Baudel quickly managed to get funding for another project that she’s looking after, about women’s rights. For us the most likely explanation is that agriculture is a hot potato which might make people angry”. It is true that seeing the daily life of the people who produce the cheap raw materials we consume (thus maintaining a protected way of life and unpolluted environment), and who then have to buy high priced value-added French exports, might anger some. However the cost of this project is also somewhat surprising.

The Gens de Terre project is still in the minds of the team members but now they have gone in different directions and moved on to other things. Here comes a pause in the conversation. A silence hangs over the frothy cappuccinos, over our table. Then Alain Keler breaks it, demanding an explanation from his colleague; “why don’t you go back to that work you started in France about reintegration through working the land”? Didier Lefèvre fills me in; “That was some work about community gardens that I did in France between Vannes and the Paris area. It was before the European project and I’ve lost touch with all my contacts so it’s difficult to go back to that now”. Keler’s next compliment comes out sounding almost like a criticism: “Come off it - it was nice and simple”. Alain Keler has still tried to link his work with the issue of EU enlargement. He explains how “A production company offered me a job working on a film about life in a small Polish village but in the end Arte [a Franco-German cultural TV channel] turned down the project.” They both certainly aren’t short of ideas. Didier Lefèvre is in the limelight as the scriptwriter and main character of a three volume (the third as yet unpublished) award-winning French cartoon Le Photographe (The Photographer). In it he describes his memories of Afghanistan from when he was there in 1986 working for Médecins Sans Frontières. Alain Keler was awarded a grant in 2004 and so is continuing his work in Israel and Palestine entitled Le pays de la terre qui brûle (“The land of burning earth”). The cappuccino is finished so time is up. Both photographers say goodbye and leave, still deep in conversation.