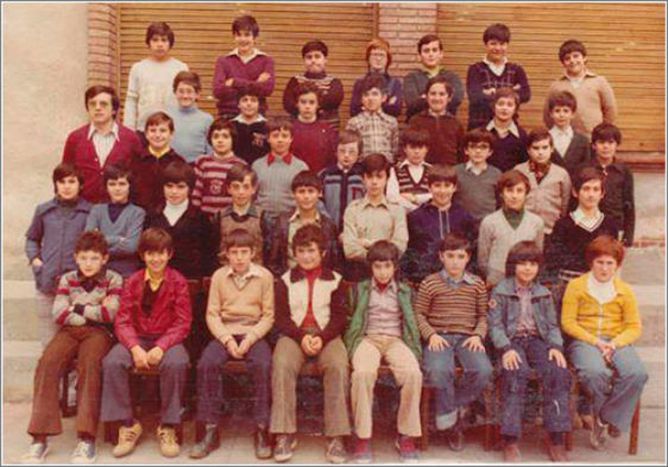 We asked Javier Ikaz and Jorge Díaz to come to the blackboard; they’re the creators of Spanish blog Yo fui a EGB, a platform for people educated under the old Basic General Education (EGB) system. We spoke to them about the key to their success, their best childhood memories, their EGB classmates and their new book, Yo fui a EGB 2, which went on sale 6 November. Javier and Jorge, up to the front!

Spanish Chimos sweets, the sorely missed (and no less worrying) Tulicrem, alien arcade games and even Victoria plimsolls: All of these fit into the drawers of the school desks at the Spanish ‘school reunion’ blog Yo Fui a EGB, the biggest class to ever fill Spain’s classrooms which was created a few years ago, almost by chance, by its top pupils Javier Ikaz and Jorge Díaz. They claim that they don’t consider themselves nostalgic, because “there’s no nostalgia like there was in the past,” although every day Yo fui a EGB manages to touch hundreds of thousands of classmates who travel back in time on a daily basis to find out what happened to Angela Lansbury, the shrewd protagonist of Murder, She Wrote, or to reminisce about the most popular Christmas toys of our golden years.

Yo fui a EGB started as a Facebook page and, at the time of writing, boasts 817,000 followers. In order to give you an idea of the success enjoyed by Ikaz and Díaz’s initiative, when Cafébabel got in touch with them in early October, their page had “almost 800,000 classmates,” as they call their Facebook fans. Two months later, they’ve now overcome that milestone (which the creators claimed they were intent on celebrating) by 17,000 classmates. Everyone wants to go to this school; Javier and Jorge have managed to do what every brainy Miss Bloggs of the Spanish Basic General Education (EGB) system would have wanted: For the pupils to be fighting over one another to come up to the front of the classroom and contribute a little to the flow of the class. “We both run the page, but the inspiration and ideas come from all over the place. There’s always a friend who sees something, remembers you and takes a photo or sends you a comment about something they liked when they were little,” say the creators. “We get messages from our huge community on a daily basis with their memories, they send us photos of the toys they’ve found while cleaning… we’re moved by this gesture and we’re really grateful," they add.

This is how the entire EGB community keeps on fuelling a Facebook page and a blog which has already provided enough material for 15 editions of one book and the launching of a second one, Yo fui a EGB 2 (just like those film series in the 1980s and 90s which we were so hooked on), which went on sale on November 6th. The project has also brought them more than one award, including two in the Spanish-language Bitácoras Blog Awards; and another two in the 20blogs Awards. Despite the awards, the creators (Javier, a self-confessed film buff who’s an I.T. graduate and Jorge, a creative thinker who’s quite heavy-footed in P.E.) admit that they’re surprised by the success of their initiative and maintain that they will continue “working as best they can,” although they refuse to get out their crystal ball. “You never know whether something’s going to work or not before you’ve actually done it." 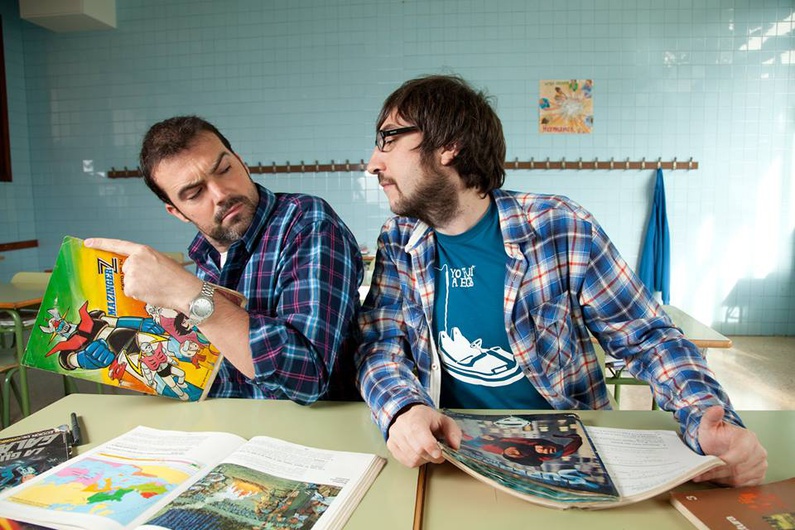 We're all nosy...and love to reminisce

The creators may well be speaking sarcastically, but nostalgia is precisely what this Spanish phenomenon has made of Yo fui a EGB. Ikaz and Díaz have managed to connect over the Internet with the generation that grew up playing mini World Cup tournaments on the village roundabout and that only got to know the miracle of the web in their early teenage years. The generation which used to pass around Super Mario on floppy disks, witnessed the death of cult Spanish TV character Chanquete and was the first to use Messenger to attract the opposite sex. Yo fui a EGB has been able to bring together members of both Generation X and Generation Y on a platform where practically everything is idealised: from the stand-up sketch shows of Martes y 13 to mortadella sausages stuffed with olives. Because everything reminds us of an era that we’ll never get back. “Our audience is fairly mixed; it makes us happy to read comments from people who follow us and didn’t even go to school in the days of the EGB system, be it because they’re younger or older,” explain Javier and Jorge. The number of followers keeps increasing every day and it’s hard to resist the idea of these two social media maestros: Who wouldn’t like to know what became of the girl from the Busco a Jacq’s advert? Or what the members of Parchís look like these days, the children who became engrained on our retinas, dancing in unison, but who are now around 40 years old?

“There’s no exact science to the things that we like the most, but we certainly like to talk about sweets in general, such as ice cream or bubble-gum, and we derive a certain amount of pleasure from seeing how the celebrities of our day look now,” explain the student representatives. Voilà! There’s the secret right there: We’re nosy. It’s a fact. That’s it. We little Spaniards are a nosy bunch. We love to find out about the lives of our neighbours, and Javier and Jorge ought to know that all too well, because they’ve got us (I’m one of the many pupils as well). Almost one million people waiting to find out which singer, actor or idol from our younger days will be the next to take the floor. If you ask them what their favourite memory is of the EGB era, they’ll agree on the fact that what they miss the most is “the moment you would arrive in the village on the first day of summer.”

But are children different these days? Are the pupils of the EGB-era different from those of the LOGSE or the LOMCE? “There are differences in the generation in which you live,” answer Díaz and Ikaz, “but fortunately children will always be children. If we’d possessed all the technology and advances in our era like the children of today have, our habits wouldn’t have been so different,” they claim.

Yo fui a EGB has allowed young people – and not just young people – from all over Spain to rediscover those afternoons of games playing tig and hopscotch with Bollicao chocolate brioche rolls and chocolate spread sandwiches, cartoon superhero D’Artagnan and Willy Fog’s little song. Many of the fans are in their thirties. Men and women who grew up in the 1980s, fell in love for the first time in the 1990s and who now, in the 21st century, are witnessing the birth of their children, as is the case with Javier. “My best year has been 2014, because the book is coming off really well but, above all, because my daughter, Paula, was born in February.”

Who knows whether he’ll be able to relive all of those moments through her and get back, as he and Jorge said, “The innocent gaze of a child, one which keeps on getting smaller over the years, a naïveté caused by lack of experience.” They told cafébabel that it’s that very childish innocence that they would bring back from their EGB years to the present, if they could. Maybe it’s just virtual reality or a product of my imagination, but Yo fui a EGB has managed to bring me back my smile from those years. And just like me, I imagine it’s done the same to many other classmates. If that’s not the case, how do you explain the fact that in the time it’s taken me to write these lines, their Facebook page has now gone on to have 817,300 followers? It’s making satisfactory progress.