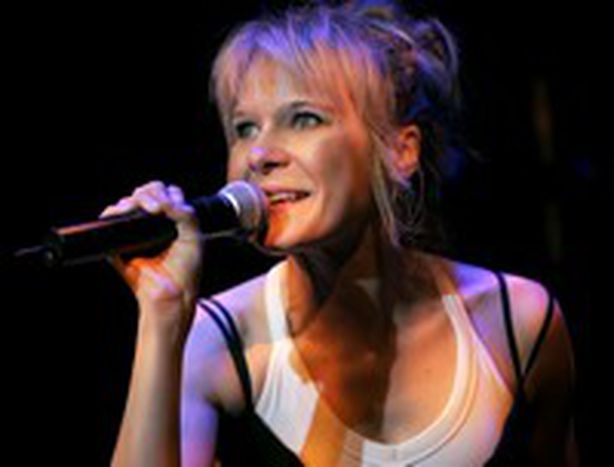 Agnès Bihl is never at a loss for words. Having been rather quickly labelled a member of the ‘new French music scene’, this 31 year old French singer puts the world to rights with wit and audacity

Straightaway Bihl jokes, ‘I could also have been a rider, a can-can dancer or a princess’.

We are sitting in an American restaurant in the heart of Paris. Without wasting any time, she orders an espresso, whilst making fun of her scabby-looking knees under her black tights. This woman may exude humour, but she looks tired nonetheless. ‘I’ve just returned from a week’s holiday with the children, but it wasn’t a rest at all’, she says, smoking furiously on a cigarette. Her little face still looks charming. ‘It’s awful’, she says, ‘it comes from being blonde. But if I come across as sweet, it’s just an illusion!’

By her own admission, it was chance that lead to Bihl becoming a singer. And love. It was after falling head over heels for an accordion player that she fell into music. She wrote her first song ‘Joulik’ at 23, having been impressed by Allain Leprest’s shows at 'La Folie en Tête', a libertarian cabaret in Paris. One self-produced album, 2001’s ‘La Terre Est Blonde’ (‘The Earth is Blonde’) later, and Bihl fell into obscurity. But she didn’t let this worry her too much.

One day, Gérard Davoust, a renowned producer with a big eye for talent, let her audition with a pianist. Captivated, he set about producing a follow-up opus entitled 'Merci Maman, Merci Papa' (‘Thank you Mum, Thank you Dad’). She recalls, ‘I was pregnant when I wrote this album and asking myself all sorts of questions. Who am I? What is my place in the universe?’ Her eyes light up whenever she talks about Rosalie, her three and a half year old daughter. Her little cherub has even joined her on an improvised duet called ‘Baby Boom’.

Having explored some taboo subjects on her first album with ‘Viol Au Vent’ (Rape of the Wind’) or ‘L'Enceinte Vierge’ (‘The Pregnant Virgin’), this beautiful rebel sets her musical adventure around themes which are prickly and corrosive. They are themes often absent to the French music scene: abortion, rape, homelessness, prisoners’ children or incest. But the label ‘politically committed artist’ annoys the young mother. ‘It gets me down when people refer to me as a militant artist. It’s like they’ve given me a bar code, it’s a goldmine’.

She is often categorised in the ‘new French music scene’, but Bihl refuses to wear this tag. She does however see herself as part of a new generation of ‘indie’ artists, who, just like Loïc Lantoine or Nina Morato, put songwriting at the top of their musical agenda. For ten years now, Bihl has been collaborating with Jeanne Cherhal (winner at the ‘Victoires de la Musique ’– a prestigious annual music awards ceremony in France – in 2005), and these days she works alongside singer/songwriter Alexis HK. This is a poetic and pointed musical world little known by the general public.

Bihl also lays claim to more universal influences: Tzigane and South American music, the Russian singer Vladimir Vissotski, Italian filmmaker Nanni Moretti, film soundtracks or books, photographs and artwork. ‘When I’m faced with a blank sheet of paper, I often think of a painting I’ve seen and admired and try to recreate it in words’. She also admits to a fascination with Clint Eastwood: ‘he has a screen presence without doing anything. He’s not scared of emptiness and does not try to pad out his performance’

This modern princess lovingly cultivates her ‘underground’ side. An authentic stage performer with her darkly humorous lyrics and gravelly voice, she enjoys a loyal and sincere fan-base. Far removed from commercial singers and teen icons, Bihl composes vitriolic songs, disapproving of the media influence on music which confines the industry simply to entertainment.

Bihl believes shows such as ‘Starnac’ (also known as ‘Star Academy’, France’s answer to musical reality TV offerings such as ‘Fame Academy’ and ‘American Idol’), make the music business look so easy. ‘They confuse being a star and being an artist. Talent doesn’t seem to come into the equation’. If this Parisian (who grew up in Montmartre), confesses to easily being an ‘anguished writer’, she succeeds admirably in not falling into the traps of voyeurism and over-simplification. Besides her own instinct, she relies heavily on the judgment of her three ‘pairs of ears’, Gérard Davoust, her friend Roxanne and Giovanni, the father of her child.

Part mischievous child, part hardened single mother, Bihl is, before anything else, a woman. ‘I don’t think of myself as the Rosa Luxembourg or the Louise Michel of the music industry though. I don’t take myself too seriously’, she says. She did however name her daughter ‘Rosalie Louise Michel’. For a long time she has had to put up with misogynistic and derogatory remarks. One of the most frequent being, ‘Who is the guy that writes your songs?’ The artist usually retorts: ‘The woman who writes my songs is me’.