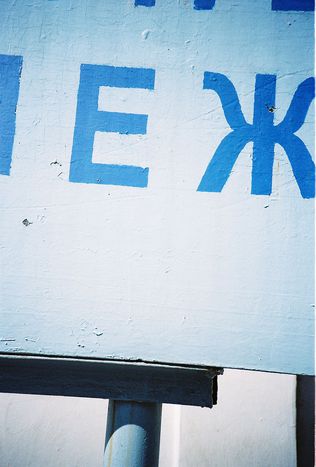 ABV guide to learning your Serbian (from your Croatian, Montenegrin and Bosnian)

Tower of BabelCulturePoliticsBalkan eye in the sky

To hail the European day of languages on 26 September, cafebabel.com tries to learn Serbian. The short rocket takes us past planet Cyrillic alphabet and planet Latin alphabet, before speeding through planet lexical history and firing off into next-door neighbour space

First things first: this language is a tale of two alphabets. What looks like a B in Latin is a V in Cyrillic. Similarly, what looks like an H in Latin is actually an N in Cyrillic. A ‘P’ is pronounced ‘Rruh’, and a Y is pronounced ‘Ooh’. One Cyrillic symbol which looks like an Egyptian spider can be recognised as a frog, the Serbian-born teacher tells her mostly French audience: the logic is that a frog says ‘jabba’, so you can remember this letter, Ж,  is a ‘Je’.

Learning Serbian in this ninety minute taster organised by Paris’ Europe and Orient House for ‘foreign cultures week’, we’re offered morsels of the same phrase in Croatian – good evening is Dobro veče in Serbian, but Dobra večer in Croatian. So how can a foreigner measure the Slavic subtleties in this family of languages which used to be one, which we call Serbo-Croatian, and which in some schools is achingly called BCMS (Bosnian, Croatian, Montenegrin and Serbian)?

Accents and vocabulary choices aside, the bottom line is that the standards of the Bosnian, Croatian, Montenegrin and Serbian languages share one dialect, Shtokavian. If you hear someone from this dialect speaking Ekavian (‘eastern’), meaning the focus in some words is on the vowel ‘e’, you’ll know that they are Serbian. You will recognise a Bosnian, Montenegrin or Croatian from the Jekavian (‘western’) dialect that they share, which means they add an extra ‘ye’ vowel into words. For example, milk in Serbian is mleko; in Croatian, Bosnian or Montenegrin it is mlijeko.

Since the 1990s war in the former social federal republic of Yugoslavia and the ensuing independence of its former republics, each language has been distanced from the other in a different way. The Bosnians use little-used oriental words to throw into their vocabulary, often coming from a Turkish or Arabic origin (thanks to the influence of their rule under the Ottoman empire). The Montenegrins have introduced an extra letter into the alphabet to add to the S and Š that exist; it’s Ś (‘sha’) with a French looking accent above it, as well as a Ź (‘zeh’). Whilst Croatian has taken care to create new neologisms in the language, Serbian has stuck close to its Cyrillic identity, pushing the use of this alphabet far more so than the Latin, which is in evidence in the country’s printed papers and books. Those Serbian papers or zines which don’t follow this trend would be allied to a more democratic, political focus.

The ‘brief guide to’ is spectacularly rounded up with a rather dim question from myself. And what about Macedonian? I plunge forth, allowing myself to voice my belief that unlike fellow ex-Yugoslav country Slovenia - which lies on the furthest edge of the Balkan peninsula and has its own language - thus Serbo-Croatian must be spoken in the republic of Macedonia (or FYROM, Former Yugoslav Republic Of Macedonia), which is land-locked in the Balkans. In fact, Macedonians have a language of their own, closer to the Bulgarian tongue. But that’s a different story, for a different foot in a different mouth.

Thanks to Natasa Dzigurski-Dubajic, president of the atelier of Slavic languages and culture, an association based in Paris