A week in Nablus

Nablus is a 2000 year old city, situated in a valley between two more or less high hills, Mount Ebal and Mount Gerizim. It has about 150.000 inhabitants and has been under Israeli occupation since 1967. In some way it reminds me of Granada with its Arabic influences and hilly, narrow streets. It actually has a street called Garnata.

When I walk around Nablus I feel safe as if I’m in a familiar environment, but there are subtle differences. People are kind and helpful, more than I am used to. They invite me to sit with them. To have tea. To have a chat. They offer me help to get where I need to be. They salute me when our eyes meet. Actually I’ve known more people here mastering the English language as I did during the six years I lived in Spain. This is a dynamic city. It’s constant rush hour. Taxis abuse their horns. People are in a hurry, always. To school, to work or to the university. The old city center has narrow streets and is packed with little shops: bakeries, soap factories, butchers, bars, restaurants, carpenters, artisan workshops and so on. And it’s a ‘rich’ city. Both economically as historically. People come down from their villages to Nablus where you can find anything you need. And it’s religious. Five times a day the muezzin’s voice resonates and echoes throughout the whole city. It’s the Adhan, the call for prayer. Its sound is soft and soothing. I like it, except the 5 am prayer which wakes me up every single day since I live next to a beautiful mosque.

In the meanwhile people try to live their life. They make the best of it, even though Damocles’ sword is hanging above their heads. That’s how a project likeMusic Harvest, for which I volunteer, is born. Originally it was a proposal from a foreign organization and a few years ago they made it sustainable. So now Music Harvest in Nablus is managed by a Palestinian organization, Project Hope. Both projects run on a paid staff but they count on dozens of local and international volunteers to help them out. And that’s where I come in. But in contrary to the major part of the volunteers that teach language classes, I do music workshops.

During my stay, I also benefit from Arabic classes with Hassan, two times a week. That’s hardly enough. I also enjoy oud classes with the great Habbib al Deed. He was kind enough to invite me, the full five minutes after I met him, at his home for an impressive musical demonstration and a delicious traditional meal. I have to say, the local gastronomy is a party in my mouth. I discover new flavors and spices I’ve never tasted before. Things I couldn’t imagine they’d exist. I advise everyone to try the local cheese, the Maklube, a traditional rice dish or the famous Kanafe, a cheesy pastry. But first things first, I came here to work. Not to get fat.

So I started work this week. Me, a young British volunteer and a local translator had our first session with kids from a community center. I’m glad to say it went smoothly. Apart from this group I’ll be working with three other groups, one in a youth centre, one in a village and one in a refugee camp. The objective? To improve their music skills. I will do utterly my best to make this a fun learning process. Both for them, as for me. I’ll help them to create and record their own song and I’ll organize meeting moments so the groups with their different socioeconomic backgrounds can get to know each other better.

Moneywise I have to say everything is more expensive than anticipated. That’s because Palestinians pay 2 taxes, one to their own country and another one that goes straight to the occupier’s pocket. There are some local products but most has to be imported. From Turkey. From China. And of course… from Israel.

In a context like this, it’s easy to believe that this is a normal city. Everybody is living their lives. Sometimes though you’re reminded. Israeli fighter planes remind you every day. This is an occupied country. 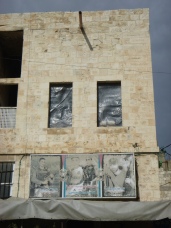 The city’s walls are filled with pictures of late freedom fighters and rebellious graffiti. And people share their stories with you. Stories how an occupier decides who enters, who goes and who stays for how long. Stories about the humiliation of local and international women, men and children. At the airport. During random road controls. Everywhere. During these controls, they – literally – confiscate anything they want. Stories figuring the three refugee camps of Nablus, including the largest of Palestine; Balata Refugee Camp. Stories how 30.000 people live in a quarter square kilometer in that Refugee Camp. Stories about people who lost it all, years ago. They find themselves deported within the borders of their own country. They live in a marginalized situation. They lost all hope. 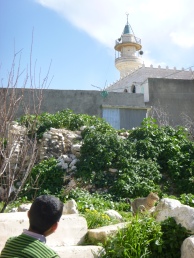 You’ll hear all of it. But still, sometimes it’s easy to forget. It looks like the occupier’s strategy is working. Divide and conquer. Cut people off. Not only from one another but from the rest of the world. They will lose all sense of unity. And after they lost each other. They’ll lose hope. And if the occupier gets lucky they might even turn on each other.

These stories remind you. The jets remind you. The gunshots I hear at night remind me. Gunshots from outlaws living in refugee camps fighting the Palestinian Authority. Oh yes, the occupier’s strategy is working.