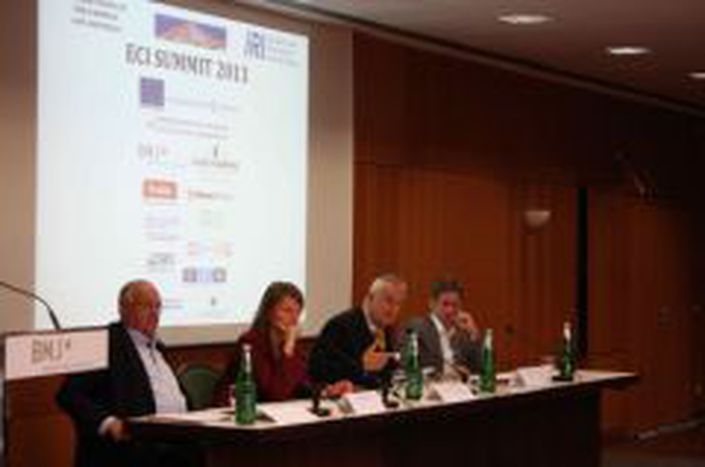 By Saana Tykkä and John Hodgshon The EU citizen’s initiative and its implementation was the subject of a conference at the Austrian Interior Ministry on the 6th and 7th of May.

The initiative itself is a bottom-up tool put into place by the European Commission to implement citizen’s agendas and include them in the EU’s decision-making process, whilst at the same giving people more ownership in the agenda. And if all those buzz words sound like an exaggeration, that was actually a small taste of what the conference was actually like. Alarm bells started ringing when someone used the words “political actors”, “agendas” and “elaboration of context” in the same sentence. And we were right.

Put in simpler terms, the European Citizen’s initiative is actually a planned new political tool to be put into practice by the EU on the 1st of April 2012 (oh the irony!), which will give people more say in the EU and make the union a more democratic institution. At least, that’s the idea.

The initiative will make it possible for citizens across Europe to collect signatures on different topics. The organisers, a citizen’s committee, then have one year to collect the necessary statements of support. Competent authorities in the Member States then certify the statements, and if there are enough signatories in each member state, then this topic will be brought to the EU commission’s attention. The EU commission then has three months to examine the initiative and decide how to act on it. On paper it sounds like a good idea; by allowing ordinary people to vote on issues important to them, this mechanism will make the EU more democratic by giving people more say in the way the EU is run.

Present at the conference were Johannes W. Pichler, the director of the Austrian Institute for European Law and Policy, Bruno Kaufman, president of the Initiative and Referendum Institute Europe and Richard Kühnel from the European Commission. Many of the participants were from various institutes related to the EU or other governmental organisations, but there weren’t exactly many people representing ‘the ordinary citizen’ there. For us this was another signal for how this initiative was being organised.

The ECI/IRI initiative can be criticized for its lack of coordination with EU citizens, the same people whose involvement with European Union issues it aims to improve. In a wider perspective, however, this relates to structural problems in the EU and its citizens in general. Since European elections began, turnout has been considerably lower than in the national elections of participating European countries. For example, the participation rate in the 2009 EU election was close to 40 %, which is significantly lower than in national elections. This raises a question of parliamentary democracy in the EU, since the European Union has grown more and more powerful in recent years and today has more influence on national legislation than it has ever had before. Indeed, democracy was a frequently mentioned word during the conference. That the speakers even quoted a direct dictionary definition illustrates the highly abstract level of the ECI/IRI instrument.

This persisting distance between the EU and its citizens was often mentioned, as well as another related topic: the erosion of party policies and the individualisation of the society. The lack of interest in traditional party policies was brought up by the second round of speakers, when the implementation and possible role of Austrian actors was discussed more thoroughly. In a private interview, Johannes Pichler admitted that one genuine problem in developing European Citizen Initiatives is the lack of organisational bodies that could provide support for implementation. One possible partner in Austria could be national policy parties that have both interest and competence in these kinds of activities.

One goal of the ECI/IRI is to make EU policy processes more transparent and encourage the public participation, thus strengthening the European identity. The ECI/IRI instrument would therefore contribute to creating a European civil society. However, it is questionable whether civil society can truly be created from above. The term “civil society” already defines itself as a sub-culture independent from the political sphere and its influence.

This topic put aside, how could ECI/IRI improve the involvement of citizens in European issues?

To outsiders it appeared this was not so clearly defined. Until now, the ECI/IRI process has focused on the conceptual framework but concerned itself very little with practical issues. That is why the authors found it odd that the discussion mostly concentrated on the use of media (or the lack of European-wide media thereof) and publicity issues. Admittedly, the problem is a concrete one. As Jürgen Habermas stated, the media works as a third state power. It creates a public platform for relevant and political issues that are shared with different actors through which decision-making can be controlled and citizens can be informed about development in the society. Lack of such a sphere does indeed play a role in the development of the European idea. However, media is an independent institution, whose function is also to criticise and question, not to diffuse political symbols in the society. The participants of the ECI/IRI conference often appeared oblivious to this, demanding in their statements a creation of European media that could be used as a tool to distribute the EU Commission and EU concepts across the EU, and also be used to promote the ECI/IRI.

This is in direct conflict with the concept of free media. As a matter of fact, the suggestion alludes to a situation when governmental organisation defines what is to be published in the media. The Soviet Union and DDR are just some examples that come to mind. Also, if media is the only tool that is used in promoting the ECI/IRI, the earlier situation will persist; the ECI/IRI will remain the same abstract concept as it has been until now and the EU institutions will be just as distant as they always were. You get publicity not by publishing, but by cooperation and coordination with different actors.

One of the most worrying aspects of the ECI was the Commission’s role within all of this. When one considers that the Commission received more power through the Treaty of Lisbon, then the whole point of the ECI becomes somehow redundant. In the EU’s current structure, the Commission creates laws and guidelines, which are then passed onto the Parliament for approval. Whilst the Parliament can request legislation, it is not able to propose legislation. This comes from the Commission or the Council, and some would suggest that this turns the Parliament into little more than a rubber stamp for the Commission’s decisions. The same problem pertains to the ECI. As Professor Lengauer from the University of Vienna explained, none of the proposals that may be put forward through the ECI are legally binding. The ECI is designed to bring issues to the Commissions’s attention, but the Commission is under no legal obligation to turn such proposals into law. As Richard Kühnel from the Commission explained, the ECI is designed to provide initiative to political proposals and to create the political will to drive through proposals. However, it is difficult to imagine the Commission putting into force any proposals that would act against its own interests. These authors can imagine that a major theme that would motivate many citizens would be to carry out changes to the EU’s structure, which would make it more transparent and democratic. On the other hand, would it be possible for the Commission to simply ignore proposals which had a strong ground swell of support? It seems this would rob the EU of credibility.

The second part of the panel discussion on the second day of the conference concerned itself with the grass-roots movement that the ECI should engender, and the degree to which national parties should be involved in tabling proposals. The difference in opinions between the panellists was extremely revealing of the dangers that the ECI is exposed to. Put simply, the representatives from the Austrian parties (Grünen, ÖVP, SPÖ) were in favour of seeing the ECI used to address ‘political’ issues, and that parties could be involved in formulating proposals. This of course brings many dangers with it; parties could be extremely tempted to use the ECI to forward their agendas, with the result that the ECI is no longer truly a citizen’s tool, and that this would cause party splits, which might prevent proposals. The Commission representative, Richard Kühnel, was also against the ECI being a political tool, and spoke quite strongly about the Commission’s desire to see as few political institutions involved in the process as possible, ensuring that the ECI remained a grass-roots movement, whilst ensuring that citizens’ expectations were managed. This also has its dangers; since the Commission would then be one of the few bodies that supports and encourages the proposals, they would have an undue amount of influence on the direction that the proposals took. Mr. Kühnel’s comment about managing expectations also suggested that the Commission would be interested in ensuring that citizens took much to come from the ECI.

This is not to say that ECI/IRI initiative should be abandoned straight away. Regardless that there are a lot of problematic issues to be covered and dealt with, the EU lacks an open discussion forum. ECI/IRI could contribute to creating this kind of a public space. And, although the role of the Commission can be questioned, especially if it takes a larger role in coordination of the IRI, the fact that it has created this initiative speaks volumes about the good intentions of the Commission. So, even if the initiative is still on a very abstract level, and mostly hovers in the air, it could truly contribute to creating the EU public forum. But this means that the initiative must actually be brought down to the citizens, not left in the hands of those institutions that are considered to be too distant from everyday Europeans.

At least the organisers and discussants were excited about the conference. Johannes Pichler, the main organiser of the event, was especially happy to see such a big audience. He admitted that the real problems of ECI/IRI will start now, when the practical issues are to be defined, namely the main coordinator and how the funding of the ECI/IRI instrument will be dealt with in practise. However, he appeared confident that a solution could be found, and expressed a hope that the main coordinating office would be located in Vienna.

A slightly confusing wish, especially since during the conference the Austrian representatives mutually agreed that Austria especially lacks civil society.

Who knows, maybe the ECI/IRI could create that?