A new archaeological site for Athens: the Lyceum of Aristotle

The archaeological findings of the Lyceum of Aristotle discovered about 14 years ago  in Rigillis street, during construction works for the Museum of Contemporary Art Basil and Elise Goulandris. Since then, the place was left to the mercy of the weather and the indifference of politicians. The philosophical school operated during the ancient times until the reign of Roman Emperor Hadrian.

Up to now, archaologist brought to light a narrow room, which according to the excavator Efi Lygkouri, was the library. There are also some remnants of the Palaestra (part of the school used for gymnastics), The rectangular courtyard is surrounded on three sides by galleries accompanied by two other rectangulars, which are developed on both sides. In these places one could find the baths, while the left and right was (a space where athletes were anointed with oil), the (place where the athletes put in their body powder or sand) and . The installation of the high school spread over a much greater extent than it is today.

After many years of excavations, glorious declarations and an unacceptable delay in regeneration works, finally the  enhancement of the site will continue without the expensive and grandiose roof. The Ministry of Culture uses the sponsorship given by OPAP of 4 million.The initial study involved the creation of a roof the height of which would be 12 meters. Steel and glass would cover the site at a cost of 400,000 Euros. However the new study (presented at the museum by scholars Dimitri Koutsogiannis and Dimitri Koukoulas) includes three small sheds of metal and glass which obscure only the vulnerable parts of the excavation. The interior of the building, a semi open space of the peristyle and the atrium courtyardwill be shaded as well. 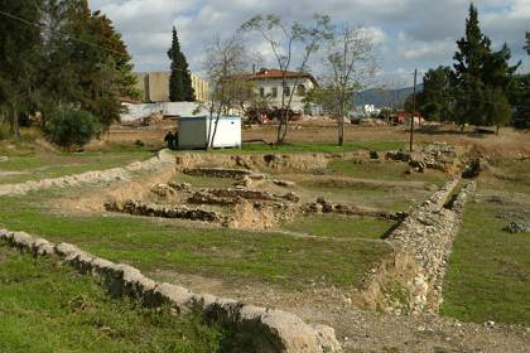 The D. Koutsoyiannis said: "We want the Palaestra to be visible and recognizable for the pedestrians of Ringilis street. This is the reason why we are not planting trees along the street''.

The goal is to give the visitor the sense of natural space as it was during antiquity.

The site will have access to Queen Sophia Avenue, after a small adjustment of the current one, which will move 22m. south. Access will be permitted only in the heart of the Palaestra, through the two ramps put in the same locations were the ancient entrances to the site used to be.

A small building with an atrium area will be built and the rest will united through trails with the eastern part of the garden of the Byzantine Museum.

The study projects involve extensive planting and lighting. The project cost will not exceed 1.5 million euros, while the remaining 2.5 million of the sponsorship will be used for the planting of the garden of the Byzantine museum and the restoration works of the ''Duchess of Placentia'' building.

The project will start immediately as the first amount of the sponsorship is expected on 15 October and the archaeological site is estimated to be ready for visits in about a year. 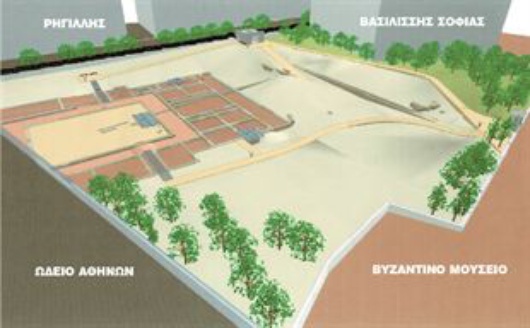 The completion of this project will allow downtown Athens to  become a single space of 36 acres of culture and walking, which will provide nice green spaces and recreation for all ..