A Choice for Europe?

The European institutions are fighting the low turnouts in the European Parliament elections with a common strategy and a single message throughout Europe: “It’s your choice”. The problem: A choice requires different alternatives. A single campaign requires a single discussion.

Paradoxically, the turnout in European elections has been decreasing ever since the first direct elections in 1979 while the power of the European Parliament has been steadily increasing. More and more laws are made by the ‘citizen’s chamber’ while less and less people take advantage of their right to directly influence these decisions. 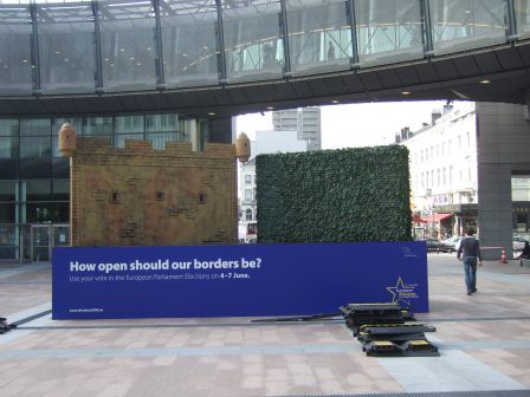 Does the EP campaign promote the idea of Fortress Europe?

It’s all about choice

This year, there will be no lectures about citizen’s responsibilities or duties in the European Parliament’s communication strategy - the European elections 2009 are all about choice. The key message is that all citizens can influence policies by giving their vote. This message is spread with a single campaign throughout Europe: Postcards, billboards and 3-dimensional street installations will raise important questions concerning energy, climate change, agriculture, consumer protection, security, free markets and other important topics. In room-sized cubes with the name “choice boxes”, citizens can record their views on European issues – selected scenes will be played on Europarl TV, Youtube and on screens outside the boxes. In order to reach all potential voters, the campaign will also be present on TV and radio, young voters are supposed to be attracted by My Space, Facebook and Flickr.

So far so good. In times of crises, with important challenges ahead, it is important to convince European citizens to take advantage of their right to vote. It is very pleasing that for once the European Parliament and the European Commission are using a single campaign throughout Europe raising questions that definitely need to be discussed on a European level. But to which extend is this campaign a European one and how much choice do voters really have?

“Choosing” the pig in the poke

It is true that the European Union is facing important challenges in the fields of economics, finances, environment and society that demand common action. The main argument of the European Parliament election campaign is that by voting for one party or another, citizens can influence the choices made in the next period of legislation. However, voting in the elections to the European Parliament is still a bit like buying a pig in a poke. Voters opt for national political parties that form part of European parties. On the ballot, there is no hint as to which European party this will be.

If the European Parliament offers choices, it would be important to clarify what these choices really consists of and what they result in. Presenting the names and logos of the Groups of European parties on the ballot would be a first step in the right direction. It would, however, change nothing about the fact that European parties are very heterogeneous due to their composition of various national parties. The only way to actually know what the parties stand for, the only way to really make a choice, is to vote for Paneuropean parties with transnational lists, allowing citizens to elect candidates from all over Europe, regardless of their nationality.

Moreover, the European elections are still dominated by nationality. Citizens have the “choice” from their national parties rather than from transnational party lists with candidates from all countries. As a result, discussions are limited to the national level. Raising questions like “what kind of energy do we want?”, “how much security is too much?”, or “how far should standardisation go?” is very important. However, as long as discussions do not reach across borders and parties run campaigns based mainly on national politics, these questions will not result in finding the right answers. Instead, they might well go into the next national elections – which in some countries, like Germany, are upstaging the European elections anyway. Moreover, by tailoring the campaign to the member states, the strategy adds to the tendency of debating at the national level. The posters and installations concerning borders will above all be prominent in Southern Europe. They feature a fortress and a hedge and raise the question “What kind of borders should we have?” Not only does the presentation simplify the debate to a level that impedes serious discussion, it also prevents discussions on a European level.

This way, the strategy misses the most important point: Explaining why it is so important to solve these issues at a European level and encouraging discussions that go beyond the national perspective. One of the main campaign ideas was to speak the language people speak, the main message is choice. It is time for the European Parliament to engage its voters in real discussions. It is time to provide the basis for real choices.