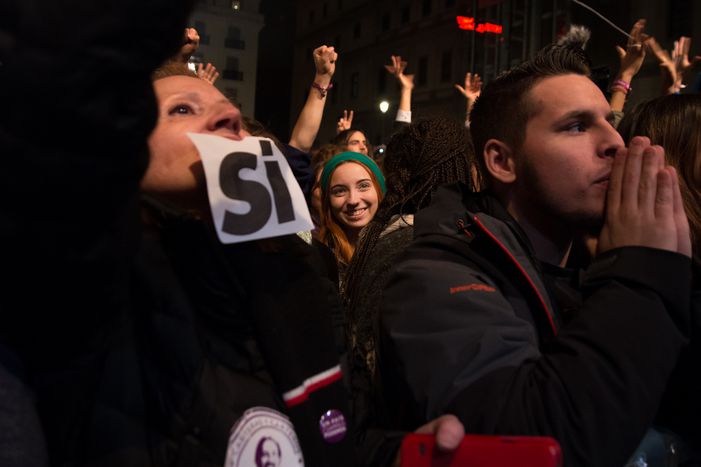 The conservatives emerged ahead of the Socialists as the strongest party in Spain's parliamentary elections on Sunday, but Prime Minister Mariano Rajoy lost his absolute majority. The third and fourth positions were taken by the left-wing Podemos and the liberal Ciudadanos. The country is now completely ungovernable, some commentators write. For others the result is a step towards more democracy.

Not a revolution, but a clear change - El País, Spain

A stable government will only be possible through pacts that are very unusual for Spain, writes the centre-left daily El País, noting however that this is what the voters want: "The new system established at the polls does not mean a revolution in itself, but it is a major change. From the outset it reflects the wishes of Spaniards, who have called for negotiation and consensus, and are in a large part sick of the conflict with no solution that the highly polarized situations of the past engendered. Parliamentarians will have to learn to live with a scenario of minorities, and will have to employ their best efforts in order to ensure the stability of the system. There is no doubt that there will be complex negotiations to form a government, but there is hope that the main constitutional protagonists will take on this role with a constructive attitude." (21.12.2015)

Election could have a positive effect - Público, Portugal

The liberal daily Público contemplates the start of the new legislative period full of hope: "As was the case in Portugal the lack of an absolute majority could mean that power is transferred to a parliamentary alliance that is not necessarily the most obvious constellation. … The two major parties (PP and PSOE) will have to negotiate with Ciudadanos and Podemos. That alone is not a guarantee of new politics but it ushers in a new cycle that will be more unpredictable but also more challenging. Naturally this applies only if the parties make a serious effort to reach an agreement and a consensus - and if the negotiations produce something that responds to the desire for change the voters have expressed. Many say that it will be of short duration, but this new legislative period could be a pleasant surprise." (20.12.2015)

Spain has become ungovernable, the business daily De Tijd writes with an eye to the election results: "It will now take considerable vision and leadership to put together a functioning coalition. ... The fact is that the euro crisis has also given Spain a fragmented political landscape whose worst repercussions - like high unemployment, inequality and poverty - have not yet even been tackled. During Francisco Franco's dictatorship there was no room for political plurality. Fifty years later there is no longer a functioning majority. Spain has gone from being a dictatorship to an ungovernable democracy in record speed."(20.12.2015)

With 13.9 percent of the vote the new liberal party Ciudadanos came fourth in the elections. An extremely unfortunate result, the liberal daily Corriere del Ticino comments: "A cooperation between Rajoy and the liberals of Ciudadanos would have been the most interesting option and also the one with most potential. Because the liberals are more positive and constructive than Podemos, and they aren't trying to dismantle the achievements of the last 30 years of Spanish politics. They want a fresh start but they aren't preaching morals and they have also proven to be a moderate alternative to system critic Podemos leader Pablo Iglesias. Moreover the economic programme of the conservatives is virtually identical to that of the liberal leader Albert Rivera, who, a Catalan himself, is also against Catalonian independence. He might have been the right person to put a stop to the regional rebellion."  (21.12.2015)