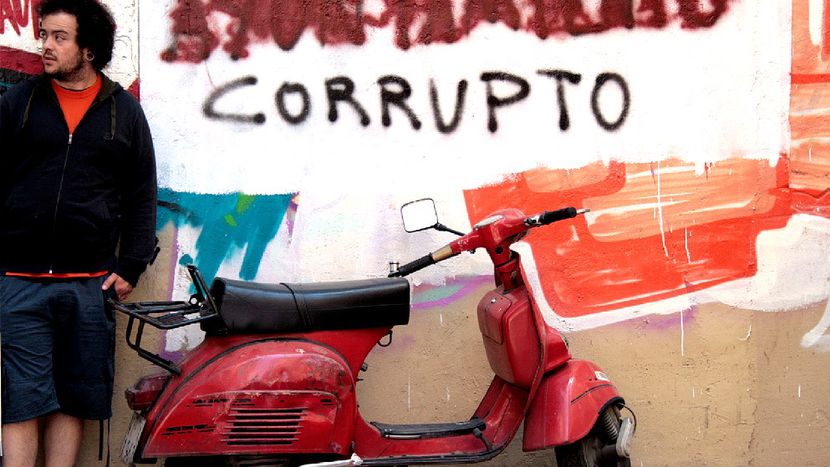 In Europe, Denmark, Finland and Sweden tie as the world’s 'very clean‘ countries according to Transparency International's most recent Corruption Perceptions Index. Latvia and Bulgaria edge dangerously towards the bottom of the pile, while Ireland reprimands itself despite a 'fair' rating. Thoughts from Europe’s blogs and portals

According to Transparency International (TI) Bulgaria is even more corrupt than it was one year ago. Sobering news for Boyko Borisov's government, which came to power in 2009 with promises to eradicate the rampant corruption and mismanagement in the country: ‘Despite committing fraud in the billions and burdening Bulgaria with the image of the most corrupt state in Europe, not a single minister has been condemned. Not a single mafia boss is sitting behind bars.

Bulgaria is 73rd in the ratings, with Greece coming off most corrupt EU state at 74th position

At the very most, the loudly trumpeted police activities result for those condemned in court in a remand period or a comfortable house arrest. On top of that Bulgaria is now even more corrupt than it was before. Corruption practices have become more sophisticated, because the supposedly legal business world does everything in its power to reinforce the corrupt status quo’ (Edvin Sugarev in his blog for the portal)

Read the full article ‘Корупционната България’ on the Svobodata portal

According to the latest corruption index by Transparency International, a Berlin-based global civil society organisation, Latvia scores only 4.3 on a corruption scale of one to ten. This is a bad result and even lower than last year's: ‘We don't have to look for the reasons why Transparency International reached this conclusion for long: there has been a series of bribery scandals here. But what was the politicians' reaction? Between you and me: none.

This Transparency International rating is a disgrace for Latvia, especially considering that Estonia has long since overtaken us. Just a few weeks after the elections [prime minister Valdis Dombrovskis)' governing party alliance] Unity is already disappointing the people who voted for it because they had hoped for more honesty in Latvian politics. Boo! Boo!’ (Kārlis Streips in his blog with the portal)

With a score of eight points Ireland ranked 14th on Transparency International's anti-corruption scale. Although this is good for attracting investors the rating is not entirely correct, writes the conservative daily: ‘Ireland may not be amongst the most corrupt but we nevertheless managed to turn a blind eye to practices that won us the unenviable title of the wild west of European finance. But then that was light touch regulation and not corruption. We await, increasingly impatiently, the courts' ruling on where the line between one and the other lies.

Transparency International's definition of corruption may be too narrow to accommodate very many of the failings of human nature that lead to blood-red, brown-envelope corruption. Though we must celebrate our very positive rating, a rating very many countries would love to have, we should be at least honest with ourselves about our dishonesty’